Congratulations to Abby Webb of Sandia, TX and Jacqueline Baird of Rockport for each winning $1,000!

Texas Electric Cooperative, NEC Retail recently held a facebook contest to encourage members to like the NEC Retail facebook page. The contest ran for two weeks and two names were randomly drawn. After the winners were confirmed as NEC Retail members, and responded back to our request for confirmation via Facebook, they won!

Jacqueline Baird was tickled pink. Jacqueline initially thought NEC Retail was calling in response to a power-outage call she had made to AEP. BUt when she found out the real reason she was more than happy. She has just received notice earlier in the day that she needed a roof repair that would cost around $1,000. While she had to draw funds from savings to pay for the roof, Baird will get several months of free electricity which will free up some funds.

Six-year member, Abby Webb,  was also very excited. She may have already purchased additional lottery tickets she was so happy! Abby is preparing to marry Raymond Dale Jones soon. Having some extra funds each month will certainly be a welcomed blessing.

Congratulations to both of these wonderful members! 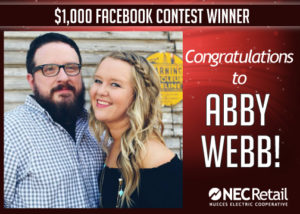 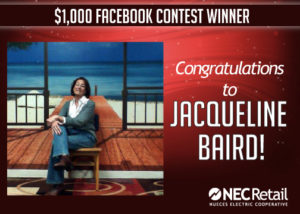 NEC Retail members Abby Webb of Sandia, TX and Jacqueline Baird of Rockport, TX will each receive $1,000 of their electric bill.

We were recently voted the #1 Electricity Provider by the Corpus Christi Caller-Times’ Best of the Best Awards for the 7th year running!