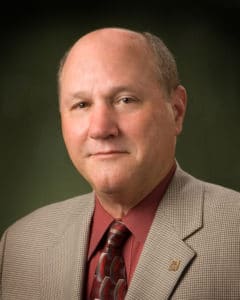 “I am very excited to be joining one of the most progressive electric cooperatives in the nation, Nueces Electric Cooperative (NEC).  NEC has a great Board and staff who have overcome the challenges of deregulation in a manner not attempted by other cooperative and municipal electric utilities in the state.”

McCuan comes to the Co-op after serving as General Manager and CEO of the Kerrville Public Utility Board (KPUB), a position he has held since 2008.  Prior to KPUB, McCuan worked for CPS Energy of San Antonio, Texas for over 23 years where he was Vice President of ERCOT and Federal Regulatory Affairs at the time of his departure.  McCuan’s 33 years of industry experience  includes experience in high-voltage transmission  systems,  substations, distribution systems, metering,  business information systems, and power purchase.

NEC President, Brian Menking discussed the search process. “We were very fortunate to have a field of very qualified candidates applying for the CEO position at NEC which made the Board’s selection a very difficult one.  Our choice of selecting Trace McCuan was based on his technical and administrative experience in managing electric utilities and a passion for working with all employees in providing the membership with the best service possible at an affordable rate.  He brings to this position a vision of where NEC can be tomorrow beginning from where we are today.  We look forward to Trace joining the NEC family.”

McCuan will be the Co-op’s sixth C.E.O. since opening it’s door in 1938. He will become a part of the Co-op’s rich history of serving south Texas and will continue to expand  and enhance the Co-op’s unique business model . In 2001 the Co-op’s membership voted to deregulate making it the only deregulated Co-op in Texas and only one of a few in the country. In 2005 NEC officially formed a competitive retail subsidiary, NEC Retail who provides co-op electricity to consumers all over Texas. In 2008, the Co-op became the first to hold Navy Base contracts and currently owns and maintains the electric distribution systems for both Naval Air Station Corpus Christi and Naval Air Station Kingsville.  More recently in August 2015 the Co-op announced the construction of a community solar array, which will be the first of its kind in South Texas.

McCuan will reside in the Coastal Bend with his wife, Rhonda. They have one son, Jeff, who is currently serving in the Army Special Forces. He says, “I look forward to the new opportunity.  My wife and I love the Texas Coastal Bend area and now get to call it home. ”

Nueces Electric Cooperative, a member-built and owned electric cooperative since 1938, builds and maintains power lines for over 19,000 south Texas homes and businesses throughout eight counties. Additionally, the Co-op provides competitive retail electric power to over 44,000 consumers within the same 8 counties and throughout other areas in the State with Texas Electric Choice.  With roots planted deep in Texas, the Co-op continues to expand opportunities to the members and the communities they serve. For more information, visit www.nueceselectric.org.