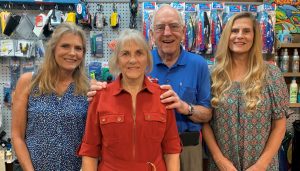 We set down with proud NEC Co-op Energy members Copeland’s Inc. for a chat about how they went from a small home business, to Texas’ oldest dive shop.

Q: Let’s start at the beginning, how did Copeland’s begin?

A: (Denise) When they (Jim and Saundra) met, he was working for the Texas Highway Department. They married very, very young. She was 14. He was 18. So the fact that they are still married 65-years later and have worked together their entire life is a miracle.

Three days after their one-year anniversary, she had a baby. Around this time, between working and raising a baby, he took up diving with a friend. He tried diving into Port Aransas Jetties, thought it was totally cool, but realized that you couldn’t get diving gear locally. To enjoy this hobby, he would order equipment for himself and eventually his friends asked him to order equipment for them as well.

Without realizing it, he had started a small business. They realized how difficult it was to get their tanks filled, so they decided to buy a compressor. Once people heard he had his own compressor, they would pay him to fill their tanks. People still wanted him to order equipment for them, and next thing you know, the home closet became an inventory room. People were coming to the house at all hours while she was taking care of the baby, and he was still working for the highway.

At some point, she put her foot down and said, “you either stop this or you get a place to do it that isn’t our home.” The last straw for her was when he said he wanted to put a showcase in the living room! That’s when he rented a space for their business at six points. He paid a year’s rent in advance because he wasn’t sure how successful the business would be. For the next two or three years he worked the nightshift for the highway department and worked at the store during the day. Eventually work asked him to transfer out of town, and he chose to work at the store full time.

Q: What was that experience like? Starting a new business while raising a family?

A: (Denise) It was tough for them. Soon there was four babies, two years after my brother was born, I was born. Now they are both working in the shop. She use to run the shop with a two year old and a newborn. Two years later came my younger sister Debbie, and then a year and a half later became my youngest sister, Nancy.

He was in the original location for eight or nine years, and it slowly grew into a solid business. They even started selling surf boards, custom surf boards made in house. In 1970, they bought the current location here on SPID and began remodeling it. The grand opening was on July 29, 1970 and grand closing was on August 3, 1970 with Hurricane Celia. It completely leveled both businesses on the right and left side of us. Our business had a lot of water damage, it ended our surfboard business, but overall the damage was minor. We say that although it was not a blessing that Celia hit so soon after the grand opening, it was a huge blessing that it was still standing there right after the hurricane.
The new location was a huge commitment, and they needed

a second sport to promote because scuba diving was strong in the summer, but not strong enough in the winter. So they went snow skiing to determine whether they felt that sport would be a good fit. They liked it so much that skiing became part of the shop. They started selling skis, ski boots, the whole nine yards.

A: (Jim) We have a lot of families taking vacations, we also have a lot of guys that just like to spearfish together. We have third and fourth generation scuba lessons, its a very mixed demographic.
And over the course of all this time, we’ve survived because we kept finding things that would benefit our business trips. We teach someone to dive and they become a certified scuba diver, but they don’t know what to do next. So we developed trips, scuba diving and snow skiing. In fact, our biggest trip we ever ran was 100 people snow skiing in Colorado. And for the Caribbean, the biggest trip where we ran was 40 people going to Cayman. So having lessons, equipment, and trips all contributed to the business being very successful.

Q: Is there a favorite trip or something that happened on the trip that you remember today?

A: (Jim) There’s so many, we’ve had couples propose on trips around the world, and we were invited to their weddings. It’s been very, very interesting. One of the biggest benefits of these last 60 years has been the friends we’ve made that are still friends.

A: (Jim) One neat story is about our main instructors Frank and April. A friend realized they would be a great match, so he bought Frank scuba lessons with April as a birthday gift. The two became very close and he eventually proposed to her on a Copeland Dive Trip to Roatan, Honduras. They are married now with two young girls and are both scuba instructors.
They have taught other couples who also became engaged on Copeland Dive Trips. One couple in particular had an underwater proposal in Bonaire. An easy way to lose a ring, I would say.

Q: What are some advice or tips you would give to young couples wanting to start their own business today?

A: (Jim) Save when you can, prepare for lean time, and marry the right person. I have one story that relates back to that. We used to have an 85-foot boat that she told me to sell. It took me probably three years to sell it. I ran an ad in a national magazine that said “85-foot boat for sale for health reasons, my wife’s sick of it”.

Q: Last question, you’ve been NEC Co-op Energy members for some time now. What does it mean to have an electric provider who’s there for the community?

A: (Jim) Well, I don’t know why we waited so long to become a member, but we are totally happy. Fortunately, we haven’t needed support, but I know that NEC Co-op Energy has it available and that means a lot to me.